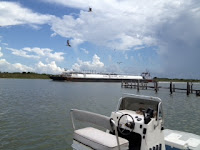 Earlier this month Mr. Cole and I got to go bay fishing for the day in the Gulf of Mexico just out of Seadrift, Texas. I had a blast. Lost the first red fish I caught when the line broke. Wish I had gotten him in the boat to see just how big he was because he put up a fight! 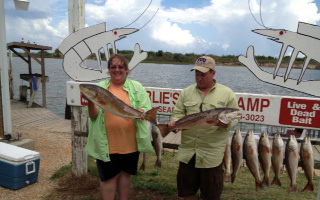 Later that morning I managed to haul in another red fish. I was so excited. This was the first time I had ever caught one big enough that I had to put a tag on him. It was so cool! He was 30.5 inches long. I also caught a trout that was 28 inches long.
The guy next to me caught the second biggest red fish. The fish hanging behind us is the total catch between both boats. 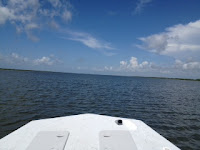 Out of the group that went on this trip--eight people in the group divided out on two boats with guides--I caught the biggest fish. It's kind of funny, because I was the only female in the group.

A view of the Gulf from the front of the boat. 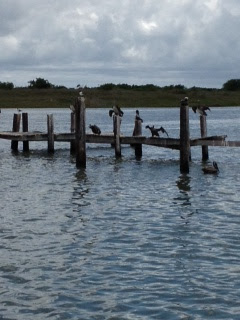 The pelican were hanging around the dock, just waiting for someone to start cleaning fish. The guys threw the heads and other remains into the water, and the pelicans just swarmed the area. We even had a couple of dolphins show up, but they were moving a little too fast for me to catch a good picture of them with my cellphone. 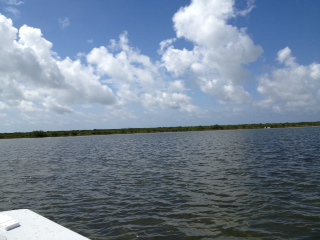 Here's another view of the Gulf and the shoreline from the boat I was on. In most of the places we went, the water was only inches deep. It was cool to look down and see stuff swim around the boat.


As you can see from the above picture, the sun and I do not get along very well. I'm still peeling, but it wasn't as bad as it could have been. I tend to sun burn really easy even with sunscreen on.  My face looks really red, but it was more wind burnt than sun burnt because I wore a hat during the entire trip. And yes, I had on sunscreen the whole time and still got sun burnt. But I love fishing, even though I don't get to go as often as I would like, so I just have to deal with the sun. :)
Posted by Annie Rachel Cole at 1:00 AM